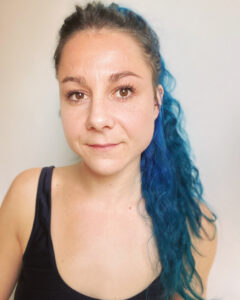 Clarisse Roud, originally from Switzerland, is a performer, choreographer and teacher currently based in London (UK) and working internationally.

After completing the pre-professional training program at Dance Area School (Geneva, CH) gifted by the strong support of Etienne Frey in 2012, Clarisse chose to dedicate her artistic training to her passion within the London Studio Centre Foundation Course (London, UK – Year 2012/2013) under the direction of Nic Espinosa.

In 2014 she moved to New York to live her American dream, focusing her dance training on some of the most famous modern techniques, contracting and releasing within the Martha Graham School of Contemporary Dance, falling and recovering within the Limón Institute. Clarisse got the privilege to perform some of Limón’s repertory, and saw herself designated to perform There is a Time for War as a Soloist. Clarisse got the privilege to work with choreographers such as Kathryn Alter (USA), Nina Atkinson (UK), Jacqulyn Buglisi (USA), Marikje Eliasberg (NL) Etienne Frey (CH), Diego Funes (USA). She is a company member of Loop Dance Company since 2017.

Clarisse is attested by the NYU Steinhardt to teach Limon’s technique principles and she is certified Mat Pilates Instructor by the Pilates Academy International. She taught and assisted intensives/workshops in New York and Europe in venues such as Peridance Capezio Center (NY), Studio Harmonic (Paris) and Pineapple Studio (London). Clarisse is currently an academic sessional Lecturer at Canterbury Christ Church University, Roehampton University and Mountview Drama School (UK).

Engrenage her first piece as an independent choreographer was premiered in New York on June 19th 2016.

In 2018, Clarisse founded Clarisse ROUD Works an independent creative platform created to express her artistry as well as to establish new exciting artistic collaborations. She’s been working closely with international renowned musician composer Aleph Aguiar, and premiered Odyssey part of Resolution Dance Festival 2019, as well as We are all Astronauts – work created for the Youth Ensemble of Peridance (NYC).

ReDiscover, an online project during 2020, with over 60 dance artists across the South East. 6 films were created and can be viewed on our Social Media Channels!

During this one year programme, graduates and early career dancers will perform alongside Loop professionals, gain teaching experience, organise your own projects and gain the skills needed to become a professional dance artist. We are really excited to welcome our new recruits in Autumn - it's going to be a great year!

Loop Summer Intensive 2021! 26th-27th July 2021. This intensive is filled with classes and workshops over three days and is your chance to meet and dance with other dancers in the area. The programme includes a series of creative workshops, learning repertoire and a variety of technique classes including Limon, Graham, Release Yoga and Pilates. To book, please email looped@loopdancecompany.co.uk.