Daisy began her training at Northern School of Contemporary Dance, graduating with a BPA(Hons) in Contemporary Dance. She then joined Transitions Dance Company and toured internationally works by Lauri Stallings, Tom Dale and Augusto Corrieri. During her time with Transitions, Daisy studied for an MA in Dance Performance. Her thesis was entitled ‘Non-Verbal Communication in Dance Performance’ and this research has become the underpinning for her practice. 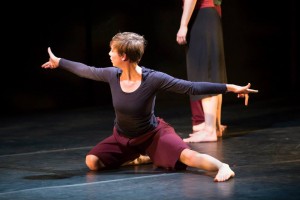 In 2013, Daisy established Daisy Farris Dance Collective and began making work for theatre spaces. Her first two works were performed at a number of platforms and festivals throughout the UK. In 2015 Daisy was commissioned by Medway Council to create work as part of the IN-SITE Project. It was through the IN-SITE project that Daisy became interested in site-specific work and began experimenting with dance for film.

Big Dance 2016 as part of Medway Council’s River Festival took place 0n Saturday 9 July, on Sun Pier just off Medway Street in Chatham. The pier came alive with dance workshops and performances for all ages and abilities to join in or watch. Loop had a wonderful day and are particularly proud of the Big Dance Pledge!

“The Big Dance Pledge workshop and flash mob style performance was the highlight for me, it was so beautiful to dance with such a diverse spectrum of the community in Medway” Marie Forbes

During this one year programme, graduates and early career dancers will perform alongside Loop professionals, gain teaching experience, organise your own projects and gain the skills needed to become a professional dance artist. We are really excited to welcome our new recruits in Autumn - it's going to be a great year!

Loop Pro Class is held at The Brook Theatre every Thursday at 11am - 1pm. This class is run by Loop Dance Company members on a four week rotation. This class provides a great professional development and networking opportunity.